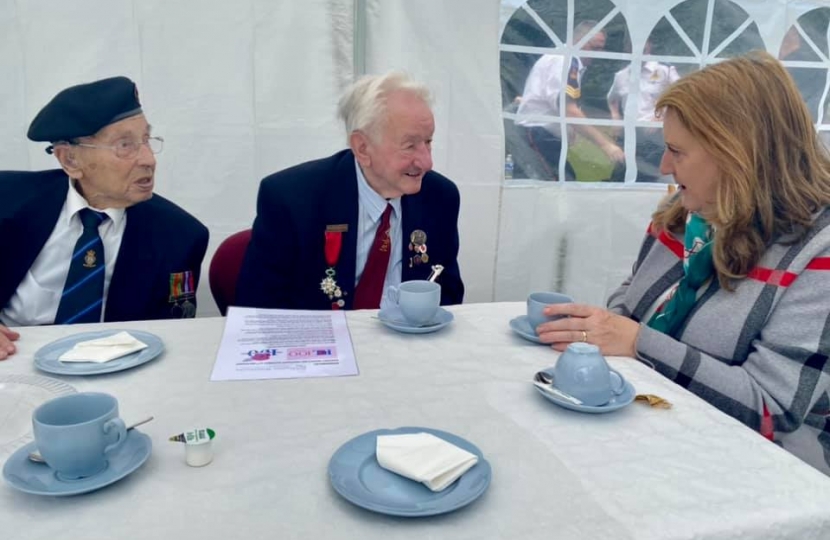 Sarah Dines MP said, ‘I was very honoured to attend the 100 year celebration of Bakewell Royal British Legion. I had a wonderful conversation with veterans Leonard and Albert. It was so humbling to learn more about the detail of Leonard and Albert’s service. They have known each other since they were children before the Second World War. Leonard is 94 and Albert is 96.  Their account of the war is fascinating and I felt very privileged to hear from them their story. The freedoms we experience today are because of the sacrifice of our veterans and I know you will all join me in thanking them.

I was honoured to be invited to lay a wreath to remember our fallen and there was a moving open air service. The two military bands were fantastic and I had a great time meeting the Royal British Legion Bikers branch, East Midlands Region, who let me have a sit on their bikes.  I want to thank the many organisers who made this celebration possible, Canon Tony Kaunhoven for his words and Cllr Mark Wakeman and his team for their integral role in organising the event.’

The Government has made excellent progress on its commitment to end rough sleeping, with rough sleeping levels falling 37% between 2019 and 2020. The Spending Review committed a further £2 billion to tackle homelessness and rough sleeping over the next three years to build on this progress.