Y Not festival and Kickstarter Scheme 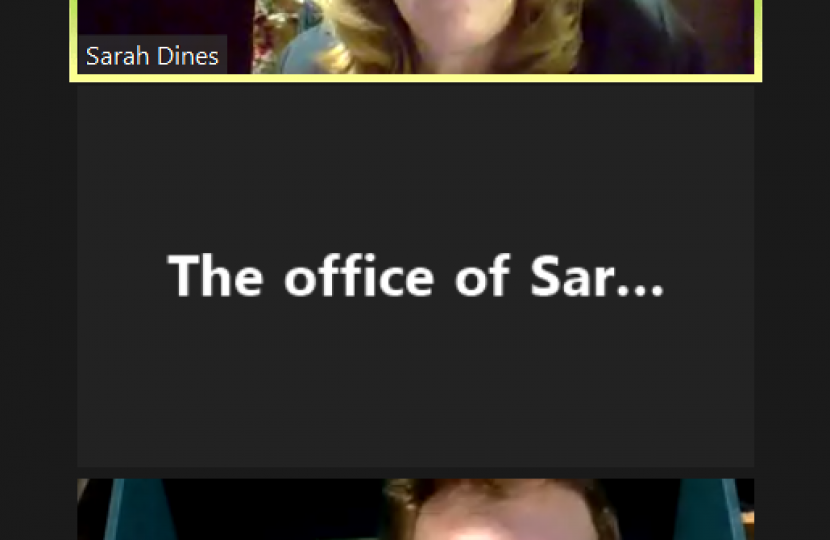 Recently Sarah Dines MP met with Jason Oakley from the Y Not Festival to discuss their business and how they are getting on during the current pandemic. The team at Y Not are planning to make use of the Government Kickstart scheme.

Sarah Dines MP has welcomed the Government’s plans to make it even easier for employers of all sizes to join its flagship £2 billion Kickstart Scheme, which has already created more than 120,000 Kickstart jobs across the UK. The Government’s Kickstart Scheme is designed to give young people at risk of long-term unemployment a future of hope and opportunity by creating high-quality, government-subsidised jobs across the UK, supporting them into work as it delivers on its commitment to level up the entire country.

Introduced as part of the Plan for Jobs, the Kickstart Scheme allows employers to offer young people between 16 and 24 who are on Universal Credit a six-month work placement that is fully funded by the Government.

Since it first launched in September, the Government has been working with companies across a wide range of sectors to create over 120,000 Kickstart jobs; and in encouraging more employers to join, it is now making it even easier for companies of all sizes to apply for any number of vacancies.

From February, businesses can apply to the scheme for any number of placements, with the 30 vacancies minimum threshold removed so they can sign up directly. Employers can still apply through one of the over 600 Kickstart gateway organisations including local authorities, charities and trade bodies, that have supported them in applying for funding for 29 or less job placements through the scheme.

Sarah Dines MP said, ‘’Y Not Festival is a vital cultural event, held in the heart of the Peak District. It provides employment opportunities for local people in a creative industry that would simply not exist in this area without an event of this scale.

Y-Not has grown into a nationally recognised festival, synonymous with the Peak District, and attracts visitors of different backgrounds and demographics to many of the other wonderful tourist attractions in the area. The benefits it brings for the local economies of the surrounding towns and villages and the opportunities for trade and employment it creates, have been, and will be again, a welcome and much-needed boost for local communities.  They use and source 80% of their suppliers from Derbyshire Dales and hope to increase this figure. They play a vital role within the community and are a much loved and well attended event. At the height of their success they were drawing in crowds of over 30,000 people to Derbyshire Dales.

The event also provides a platform for new and emerging artists to break into the industry. Furthermore, through initiatives such as the government's Kickstarter Scheme, the festivals own paid work experience scheme for college and sixth form students, and the local traders scheme, providing discounted pitches for small and local enterprises, Y Not also provides many opportunities for young people and small and developing businesses in the area.

As we look to our economic recovery, we will honour this Government’s commitment to level up opportunity so no young person is left behind as a result of the pandemic. The Government’s Kickstart Scheme is a clear demonstration that we are putting young people at the heart of our plans to build back better, and with over 120,000 Kickstart jobs already created, businesses are giving them their backing too. By investing in their potential, we can put thousands of young people on the path to a brighter future, and I would urge as many employers as possible in Derbyshire Dales to sign up.”

Commenting, Chancellor of the Exchequer, Rishi Sunak said, “Young people are among the hardest hit in times like these, which is why we’re doing everything we can to ensure they’re not left without hope or opportunity. The Kickstart Scheme is central to this. Since opening for applications last Autumn, we’ve worked with some of the most exciting companies to create more than 120,000 Kickstart jobs – which is a huge vote of confidence in our young people at a challenging time. With £2 billion available and no limit on the number of places, it’s now easier than ever for businesses across Great Britain to take part. Join us as we harness the talents of the new generation of kickstarters.”

Commenting, Work and Pensions Secretary, Thérèse Coffey said, “Kickstart has moved up a gear and I encourage employers to join us and invest in the next generation of talent by joining our Kickstart Scheme. By removing the threshold of a minimum 30 jobs for direct applications, we are making it even simpler to get involved. Now is the time to prepare for post-lockdown placements and employers will now have a choice to apply direct or through one of our 600 fantastic Kickstart gateways who may be locally connected or sector-specific providing that tailored support.’’

Residents in Matlock Bath and the surrounding area have contacted Sarah Dines MP to see what can be done to tackle littering in the area. Sarah Dines met with Paul Wilson and Ashley Watts from the District Council yesterday to discuss how they will be managing litter.